What is the safest for our students teachers and community in South Maui? 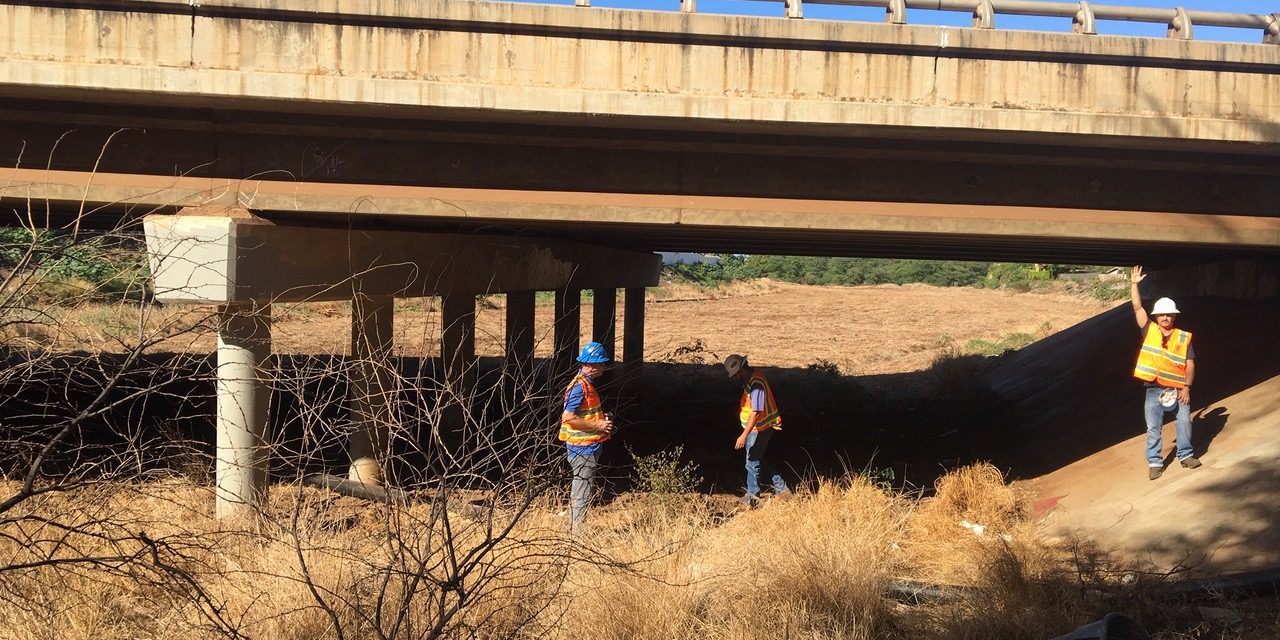 The state of Hawaiiâ€™s first four-lane roundabout will be built at the Piilani Highway intersection that services the new Kihei high school in response to a long-running dispute over a safe crossing for future students.

â€œWhen that school is built it will open with a roundabout at that intersection,â€ said state Department of Transportation Deputy Director for Highways Ed Sniffen during a recent phone interview.

State Rep. Tina Wildberger, who represents South Maui, also confirmed the roundabout would be built in Kihei. Sniffen said statistics gathered from around the world show that four-lane roundabouts work.

â€œWhen we look at roundabouts versus traditional intersections, the roundabout resolves 70 percent of auto collisions, reduces pedestrian collisions by 40 percent and fatal accidents by 90 percent,â€ Sniffen said. â€œWe definitely didnâ€™t want to be on the leading edge. Roundabouts have been used worldwide. Weâ€™re very confident we can move forward with the multilane.â€

Sniffen said the physical structure of a roundabout virtually eliminates deadly â€œT-boneâ€ accidents and also directs driversâ€™ attentions to the right where they can better spot pedestrians and other vehicles. It will also slow traffic to around 15 to 20 mph in an area where speeding is common.

â€œFor us, we absolutely prioritize safety, that is the absolute priority,â€ Sniffen said. â€œWe cannot 100 percent guarantee that nobody will get hurt or be killed. It depends on people following the rules. Weâ€™re going to do everything we can to make sure that intersection is safe.â€

Wildberger and Kihei Community Association members counter that if Sniffen and his department really want to make the roundabout as efficient and safe as possible, they and the state Department of Education would abide by a promise to provide a grade-separated crossing for pedestrians and bicyclists.

All sides appear to agree that a pedestrian overpass would be an expensive white elephant few if any people would use. KCA is pushing hard for an underpass beneath a nearby highway bridge despite Sniffenâ€™s declarations that it will never be approved.

On a visit to Waipuilani Gulch Bridge last week, KCA Education and Recreation Committee Chairman Andrew Beerer said he is undaunted by Sniffenâ€™s statements. He said KCA received a similarly negative reaction from the DOT when it first proposed a roundabout at the intersection. He said the organization has been advocating for the roundabout for years and paid for two traffic studies that determined it was the best option for the intersection that joins the school entrance, Piilani Highway and Kulanihakoi Street.

â€œSometimes you have to do their homework for them,â€ Beerer said.

Andrew Beerer walks down the middle of dry Waipuilani Gulch on Dec. 3. He is part of a Kihei Community Association contingent lobbying to have a pedestrian path built beneath the bridge. The path would augment the crosswalks of the roundabout planned for Piilani Highway at the Kulanihakoi Street intersection servicing the new Kihei high school. â€” The Maui News / MATTHEW THAYER photo

Using an 8-foot-long board, Beerer plumbed the clearance under the northern, Kahului-side of the bridge where he envisions a simple concrete pathway. He says the path would allow students from Kihei high school and Kihei Charter School, as well as walkers, workers and patrons of the tech park, to safely cross under the highway.

Sniffen says it would be a $30 million project to reconfigure the dry riverbed and install the underpass. He said with climate change, â€œ100-yearâ€ floods are becoming more common and the gulch is in a flood zone. Beerer and Wildberger contend the gulch rarely flows, is already being used by walkers and cyclists, and is wide enough to accommodate both the pathway and floodwaters.

Wearing a Kihei High School by 2016 T-shirt, longtime school advocate Beerer said he believes in the viability of the underpass. He said KCA is willing to do the studies and footwork to prove it.

â€œWe have to make this fit this equation of what they want,â€ Beerer said. â€œEventually, itâ€™s persistence. If you can show the data and it is acceptable, then they will consider it. Thatâ€™s our goal.â€

Presenting a page of photos as proof, Beerer said pedestrian underpasses beneath roadway bridges are common across America. He says this one would not need to be fancy or remain open if floodwaters crest during a major storm.

The stateâ€™s first four-lane roundabout is scheduled to be built at the Kihei intersection of Piilani Highway, Kulanihakoi Street and the entrance to under-construction Kihei high school. â€” Graphic courtesy of Andrew Beerer

â€œItâ€™s simple. Weâ€™re talking about an 8-foot-by-2-foot slab of concrete that is going to go about 40 feet. Weâ€™re going to have to raise the path so it is above the grade of floodwaters.â€

He says the underpass would lessen stress on the roundaboutâ€™s crosswalks and could eventually be part of a trail system that has been proposed to connect neighborhoods and businesses mauka and makai of the highway.

â€œThe more people you convince to not cross the highway, the less you have to stop traffic,â€ Beerer said while standing under the bridge as vehicles rumbled overhead. â€œIf we can get 60 to 70 percent of the people to come over here, thatâ€™s 60 to 70 percent who are not using the crosswalk.â€

Sniffen says the underpass is a nonstarter.

â€œIt makes no sense to me,â€ he said. â€œAll the operational and safety concerns can be handled with the roundabout.â€

During a contentious LUC meeting held virtually in September, Sniffen said the Piilani Highway roundabout would cost about $6 million and could be finished next year if approved. There was also testimony that the grade-separated crossing debate could delay the opening of the school.

Wildberger said she supports the roundabout and underpass. She and KCA put out an informal web poll in September of South Maui residents, with roughly 500 expressing support for an underpass, according to Beerer. Wildberger said she would like the DOT and DOE to exhibit more transparency and collaboration with the community.

â€œI reject the DOTâ€™s assertion that it (the underpass) would be unsafe,â€ said Wildberger, who took issue with the deputy directorâ€™s â€œover-my-dead-body type of language.â€

â€œThirty million is a compete crock,â€ she said. â€œI reject that vehemently. Thankfully, the Land Use Commission has been very fair.â€

In its November meeting, the state Land Use Commission again deferred a measure by the DOE to cancel the condition requiring a grade-separated pedestrian crossing. The DOE promised the crossing in 2013 while obtaining land use entitlements for development of the school. LUC members took the DOE to task in February for planning to do away with the provision without community buy-in. The DOE again requested the condition be removed in November, while promising to revisit the need for an underpass â€œat least four times, two of which must occur within three years of the schoolâ€™s opening.â€ The LUC deferred, with Chairman Jonathan Scheuer saying he was not satisfied with the DOEâ€™s outreach with the community.

Meanwhile, a dust fence has gone up at the long-awaited, 77-acre school project, and there is heavy equipment activity as vertical construction is set to begin. The first big change South Maui motorists noticed was a temporary reduction in Piilani Highwayâ€™s speed limit from 40 to 30 mph last month. Coming soon will be the installation of temporary traffic signal lights at the Piilani-Kulanihakoi intersection.

Sniffen says development of the school and housing projects on the mauka side of Piilani will alter how the highway is viewed by the DOT. He said its arterial classification may not yet change, but it will be considered a â€œneighborhoodâ€ highway where speeds are lowered. He said Piilaniâ€™s future speed limit is going to be 35 mph. Sniffen said he could also see raised crosswalks installed in â€œdanger areasâ€ someday.

The location of the school on the mauka side of the highway is not ideal in terms of traffic flow, Sniffen said. Having four schools within a mile of one another is sure to cause congestion on weekday mornings and afternoons, especially with development in South Maui booming and tourism primed for a post-pandemic recovery.

When asked about Kiheiâ€™s long-planned north-south collector road, Sniffen said completing the final sections of Liloa Avenue would help relieve traffic stress, but the county project is on the far back burner in terms of state funding. Sniffen said completion of the Lahaina Bypass, Puunene Avenue widening and Paia Bypass are all in line ahead of Liloa.

* Matthew Thayer can be reached at thayer@maui.neth 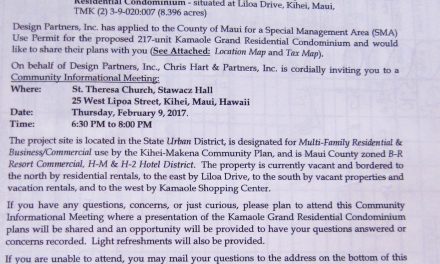 Whatever happened to the Kamaole Grand Project in South Kihei?