Standstill on Hawaiian and Environmental Expertise on the Planning Commission

There were three items on the agenda of the Planning Committee yesterday (chaired by our new South Maui representative Kelly King). The second of them was for extending and scheduling the Molokai Plan update (the Council has done NOTHING on it since receiving it in May last year, and by law they have one year to complete their part). They decided on an extension until the end of the year. Testifier 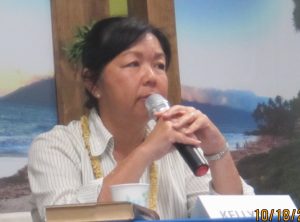 s from Molokai asked that they hold three hearings in Molokai’s different regions to allow more people to participate.

Item 1 out of 3 was about requiring one person with Hawaiian cultural expertise and one person with environmental expertise on the planning commission and the Hana advisory committee. Item 3 would have been for the same requirement on the CPAC, but that item was deferred as item 1 took up almost all of the allotted time.

Carnicelli said that including experts on Hawaiian culture and the environment would stack the decks and make it even harder to get construction of needed dwellings done.

Then there were four testifiers from Molokai who all strongly endorsed the bill based on the importance of including considerations around preserving Hawaiian culture and the environment when making planning decisions. With that, Crivello apparently felt compelled to support the requirement for a Hawaiian cultural expert, but argued against an environmental expert because “environmental knowledge is part of Hawaiian culture”.

Mike White was also in favor of a Hawaiian cultural expert but not an environmental expert, while Guzman was in favor of an environmental expert but not a cultural expert (because all members are required to take a class on Hawaiian culture so this would be redundant). Sugimura was against both because everyone should be aware of Hawaiian culture and the environment anyway. Director Spence was against them because less than 10% of cases handled by the commission have to do with culture or environment, it is difficult to find people to populate the commissions, and there are already a couple of members who are Hawaiian or married to a Hawaiian.

Hokama said he didn’t have a strong opinion either way but he wants Lanai to be excluded from the bill because Lanai is in a state of transition and just “needs people who know the island, not people who know papers”.

Cochran was the proposer and King supported the bill. As she put it, “regulation is needed when process fails”. Letting the mayor assign members has not resulted in representation of the Hawaiian and environmental concerns, so change is needed. The council gets to approve the mayor’s assignments, but it is not allowed to know what other candidates were considered. Many qualified people have contacted her after having been turned down by the mayor, with nothing the council can do at that point. Several of the Molokai testifiers also said that they knew of a number of people who fit the bill and would like to serve on the commission.

The decision was to defer.

Interesting that the majority finds it so threatening for two out of the nine members of the planning commission to have expertise in Hawaiian culture or the environment.

Maui First Responders on the Pi’ilani Hwy scene this AM