Roundabouts are good for the climate

These Americans Are Just Going Around in Circles. It Helps the Climate. (The New York Times)

An Indiana city has the most roundabouts in the country. They’ve saved lives and reduced
injuries from crashes — and lowered carbon emissions.By Cara Buckley Photographs and Video by A.J. MastNov. 20, 2021 Updated 4:41 p.m. ET

CARMEL, Ind. — It’s getting harder and harder to run a stoplight here, because there arefewer and fewer of them around. Every year, at intersections throughout this thriving city,traffic lights and stop signs have disappeared, replaced with roundabouts.Lots and lots of roundabouts.

There is a roundabout decorated with the local high school mascot, a greyhound andanother with giant steel flowers. A three-mile stretch of Carmel’s Main Street has 11roundabouts alone. The roundabout that locals perhaps prize the most features boxhedges and a three-tier bronze fountain made in France. In 2016, it was named“International Roundabout of the Year” by no less than the U.K. Roundabout AppreciationSociety, which, according to the Carmel mayor, Jim Brainard, is largely made up of “threeguys in a pub.” (Their actual membership is six. But, still.)

Carmel, a city of 102,000 north of Indianapolis, has 140 roundabouts, with over a dozenstill to come. No American city has more. The main reason is safety; compared withregular intersections, roundabouts significantly reduce injuries and deaths.But there’s also a climate benefit.

Because modern roundabouts don’t have red lights where cars sit and idle, they don’tburn as much gasoline. While there are few studies, the former city engineer for Carmel,Mike McBride, estimates that each roundabout saves about 20,000 gallons of fuelannually, which means the cars of Carmel emit many fewer tons of planet-heating carbonemissions each year. And U.S. highway officials broadly agree that roundabouts reducetailpipe emissions.

They also don’t need electricity, and, unlike stoplights, keep functioning after bad storms— a bonus in these meteorologically turbulent times.“Modern roundabouts are the most sustainable and resilient intersections around,” saidKen Sides, chairman of the roundabout committee at the Institute of TransportationEngineers.

The reason that Carmel has so many roundabouts is Mr. Brainard, the city’s seven-termRepublican mayor. 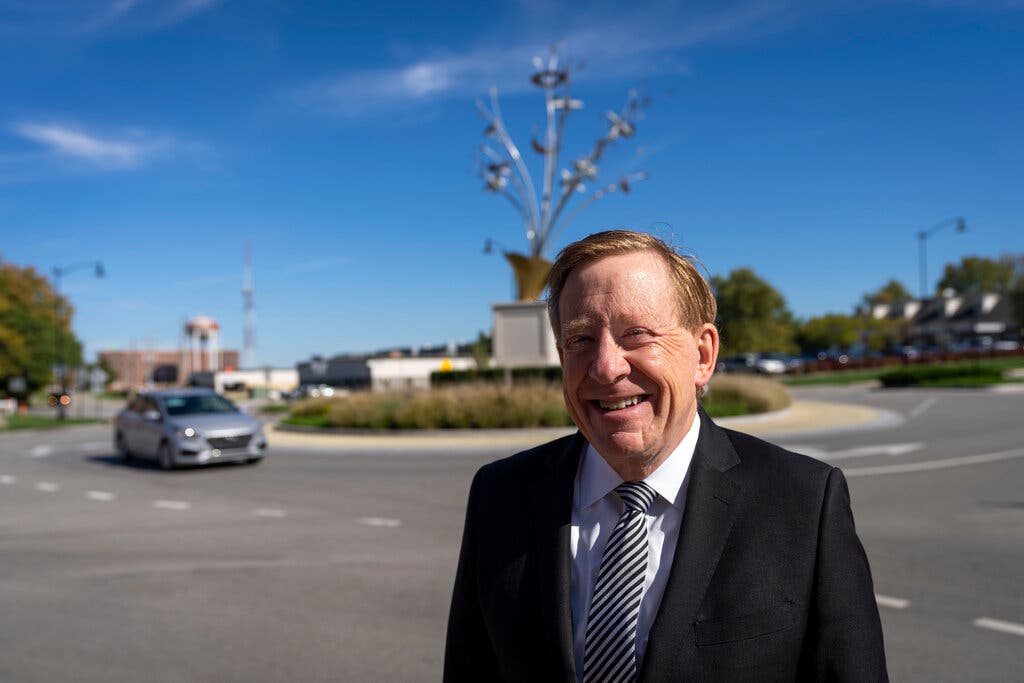 Mr. Brainard first encountered roundabouts in the 1980s, when he studied at theUniversity of Oxford and became taken with European traffic flow. After getting electedmayor in 1995, he asked a consultant to look into building a roundabout in Carmel. Theconsultant refused, saying they were dangerous and pointing to an effort inMassachusetts to remove them.

But Mr. Brainard discovered that the consultant was confusing roundabouts with rotaries,or large traffic circles, which are bigger, arguably scarier and include Dupont Circle inWashington and Place Charles de Gaulle, the multilane beast around the Arc de Triomphein Paris.Modern roundabouts, by comparison, are compact, with lower speed limits, traffic yieldsrather than stops and generally fewer lanes. Unlike traffic circles where cars enter at 90-degree angles, traffic flows into modern roundabouts at a smaller angle, drasticallycutting the chances of getting T-boned. Well-designed ones are also more friendly topedestrians and cyclists. In 1997, Mr. Brainard oversaw the building of a roundabout onthe city’s outskirts and added another two the following year. Locals, initially skeptical,warmed to them: They alleviated rush hour backlogs and stops. Within a decade, the cityhad close to 50, and doubled the number again over the next ten years.

“Now we can’t live without them,” said Becky Blystone, a preschool teacher who alsoworks at All Things Carmel, a souvenir shop on Main Street that sells roundabout-themedtchotchkes like drink cozies and playing cards.

Outsiders took notice. In 2011, CNN did a segment, and the International RoundaboutConference came to town (topics, according to Mr. Brainard, included entrance and exitangles and sightlines).

The city fanned the hype, issuing publications like “Roundabout Carmel: HighlightingCity of Carmel Roundabouts from 1997 to 2010” (it features a “dogbone” shapedroundabout highway interchange dubbed the greenest in the country) and a glossy coffeetable book, written by Mr. Brainard, called “Carmel: ’Round about Right.” It alsocelebrates National Roundabouts Week, which this year included trivia nights and WearYour Roundabout Shirt to Work Day.

“People love them here,” Mr. Brainard said during a recent tour of Carmel in his hybridFord Escape. “You couldn’t take one out.”

Not everyone is a fan.“I hate them,” said Corey Hill, a call center director from nearby Avon who said he oftengets stuck behind confused out-of-towners.

Bill Greenman, operations manager at a restaurant downtown, said local sentiment oftenvaried by mood. “If you’re having a wonderful day, you’ll probably just ignore them,” hesaid. “If you’re having a bad day in traffic, you’ll probably blame it on roundabouts.”Having greener intersections dovetails with Mr. Brainard’s climate mitigation efforts. Hewas among the thousands of leaders who pledged to uphold the Paris climate agreementwhen former President Donald J. Trump announced the American pullout in 2017.Carmel’s city vehicles are either hybrid or run by biofuels, green spaces sown with nativeplants have exploded in number and size, and solar panels help fuel the city’s watertreatment and sewage plants. Under Mr. Brainard’s watch, the city has also added bikepaths, taken out traffic lanes, widened sidewalks and increased walkability, all in an effortto get people out of their cars.

“We need to do everything we can about carbon emissions and the climate change issue,”Mr. Brainard said. 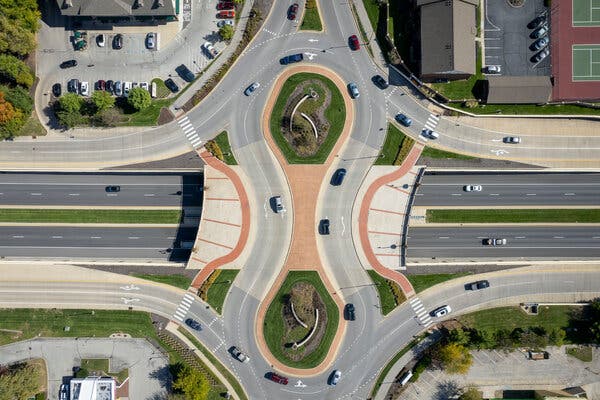 Jackson Circle in Carmel has box hedges and a three tier bronze fountain and was named “InternationalRoundabout of the Year” in 2016.A roundabout at Old Meridian Street and North Pennsylvania Avenue in Carmel, with a sculpture by ArlonBayliss titled “Grace, Love and Joy.”

Carbon emissions per roundabout are highly dependent on location, construction, volumeand time of day: A study of two roundabouts in Mississippi found a 56 percent decrease incarbon dioxide emissions; another calculated cumulative decreases at six roundabouts ofbetween 16 percent and 59 percent. Carmel’s estimates are just that — the city engineerused calculations based on a study from Virginia. But overall, the Federal HighwayAdministration has found roundabouts cause fewer emissions compared to signalizedintersections, and said the difference can be “significant.”

A double-tear or “dogbone” roundabout at Keystone Parkway and 116th.“Beacon Bloom,” an installation, also by Mr. Bayliss, at the roundabout at 96th Street and WestfieldBoulevard.

“Just imagine a post-Sandy, post-Katrina or post-Andrew world where recovery fundswere put to work building resilient, sustainable modern roundabouts instead of rebuildingfragile, polluting signalized intersections,” Mr. Sides, the traffic engineer, said.The United States has been slow to adopt modern roundabouts, though that is changingsomewhat. By one count, they now number about 7,900 countrywide, with hundredsadded each year. Still, hesitation remains.

Mr. McBride, who, as Carmel’s city engineer for 13 years, oversaw the construction ofnearly 80 roundabouts, said roundabout-curious municipal leaders often asked how towin over the public.“You can spit out fact-based data, but at the end of the day most of the general populationis scared of things that are new and different,” Mr. McBride said.Roundabouts put decision making in the hands of drivers, unlike much of the U.S.roadway system, which, Mr. McBride said, “doesn’t put a lot of faith in the driver to makechoices.”“They’re used to being told what to do at every turn,” he said.

More than half of all serious crashes happen at intersections, according to the FederalHighway Administration, which has been pushing the construction of modernroundabouts for 20 years and provides funding for them through highway safety,congestion mitigation and air quality improvement programs.

In the course of promoting roundabouts, Mr. Brainard visited Sarasota, Fla., in 2009,where he said he was met with a roomful of angry people. Among their fears:roundabouts were bad for pedestrians and would cause uneven wear on tires. But Mr.Brainard’s spiel about Carmel’s experiences evidently hit home. Sarasota now has adozen roundabouts, with another in construction and five more planned, and just thisyear won the Innovative Roundabout of Merit Award.

Locally, there’s been scrutiny. In 2019, an Indianapolis Star investigation undercut Mr.Brainard’s assertions that roundabouts were safer and more cost effective, reporting that,after Carmel transitioned to roundabouts, collision rates had jumped. Mr. Brainarddisputed their findings, saying the Star hadn’t accounted for Carmel’s populationexplosion: The number of people living there had quadrupled since he took office, withdaytime visitors adding to the load. A recent study of Carmel’s roundabouts by theInsurance Institute of Highway Safety found that injury crashes were reduced by nearlyhalf at 64 roundabouts in Carmel, and even more at the more elaborate, dogbone-shapedinterchanges.

Andrea Bill, associate director of the Traffic Operations and Safety Laboratory at theUniversity of Wisconsin-Madison, said roundabouts sometimes led to more fender-benders and sideswipes, but saved people from paying a greater price.“The thing I say to people is ‘would you prefer an ambulance or tow truck?’” Ms. Bill said.“Most people would say a tow truck.”

Still, roundabouts take some getting used to. To that end, Carmel has published tips on itswebsite, along with a roundabout map, and distributed hand-held plastic fans adornedwith a roundabout diagram and instructions about where to yield (upon entering), whatformation to drive in (staggered), and whether to stop (do not).

Driving Carmel’s roundabouts on a recent fall day, a driver from Brooklyn found herselftaken with all the dipsy-doodling that the cars of Carmel must do. There was somethingmerry in all this going around, akin perhaps to dancing around the maypole, albeit inmulti-ton vehicles that can cause injury or death. But to that point, vehicular fatalities inCarmel, according to a city study, are strikingly low; the city logged 1.9 traffic deaths per100,000 people in 2020. In Columbus, Indiana, an hour or so south, it was 20.8. (In 2019,the national average was 11.)

Ms. Blystone said people who visit the All Things Carmel shop often come in differingopinions about the local roundabouts.For those who struggle, she said she offers the same advice. Take your time. And ifthey’re in doubt, just go around again.

So this WAS a drill today, right? Part of the joint “emergency preparedness” exercise announced last week 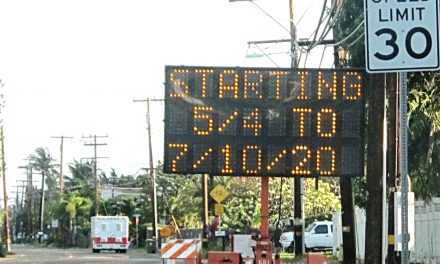 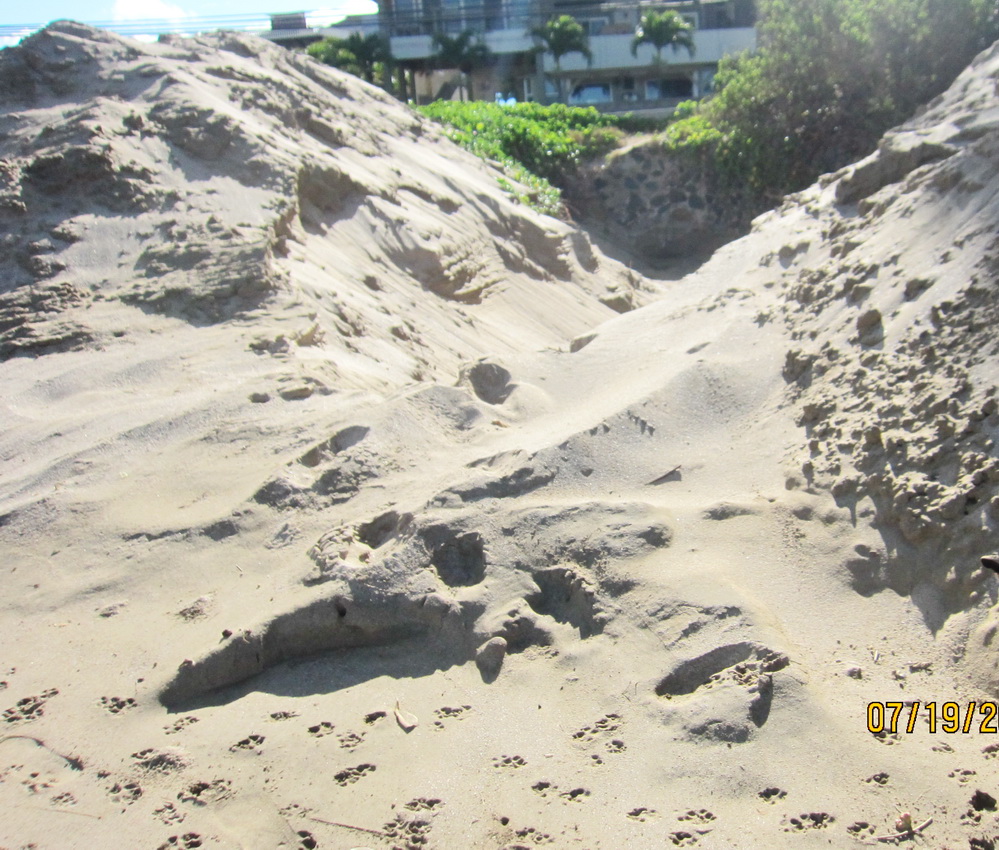 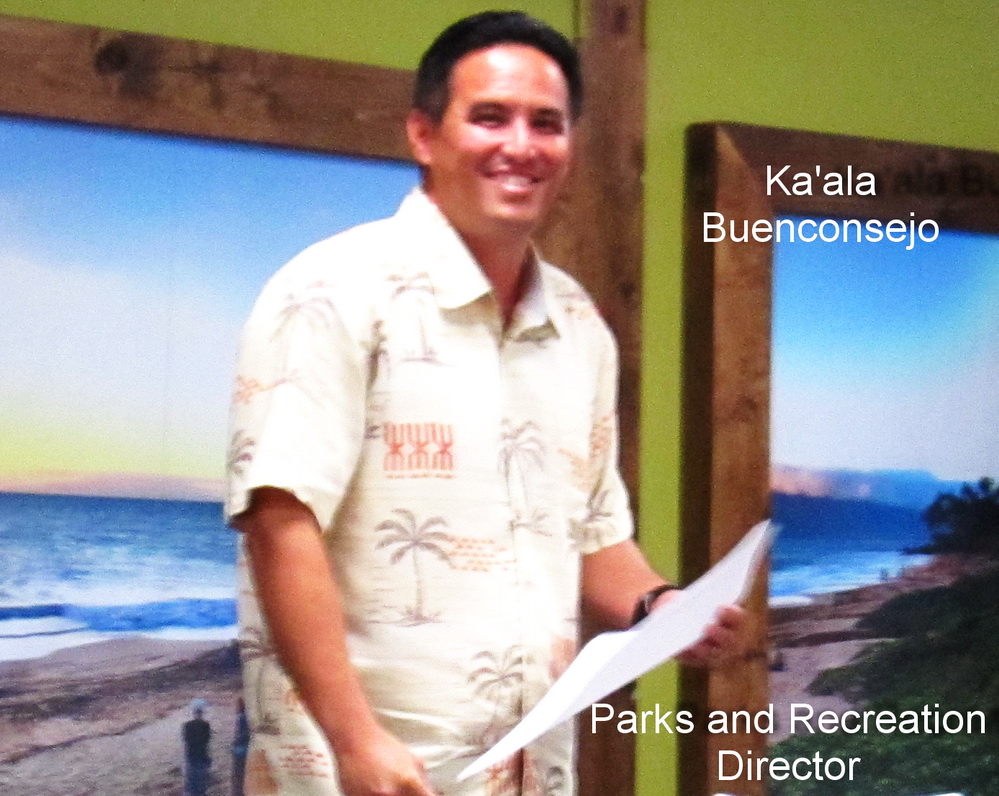