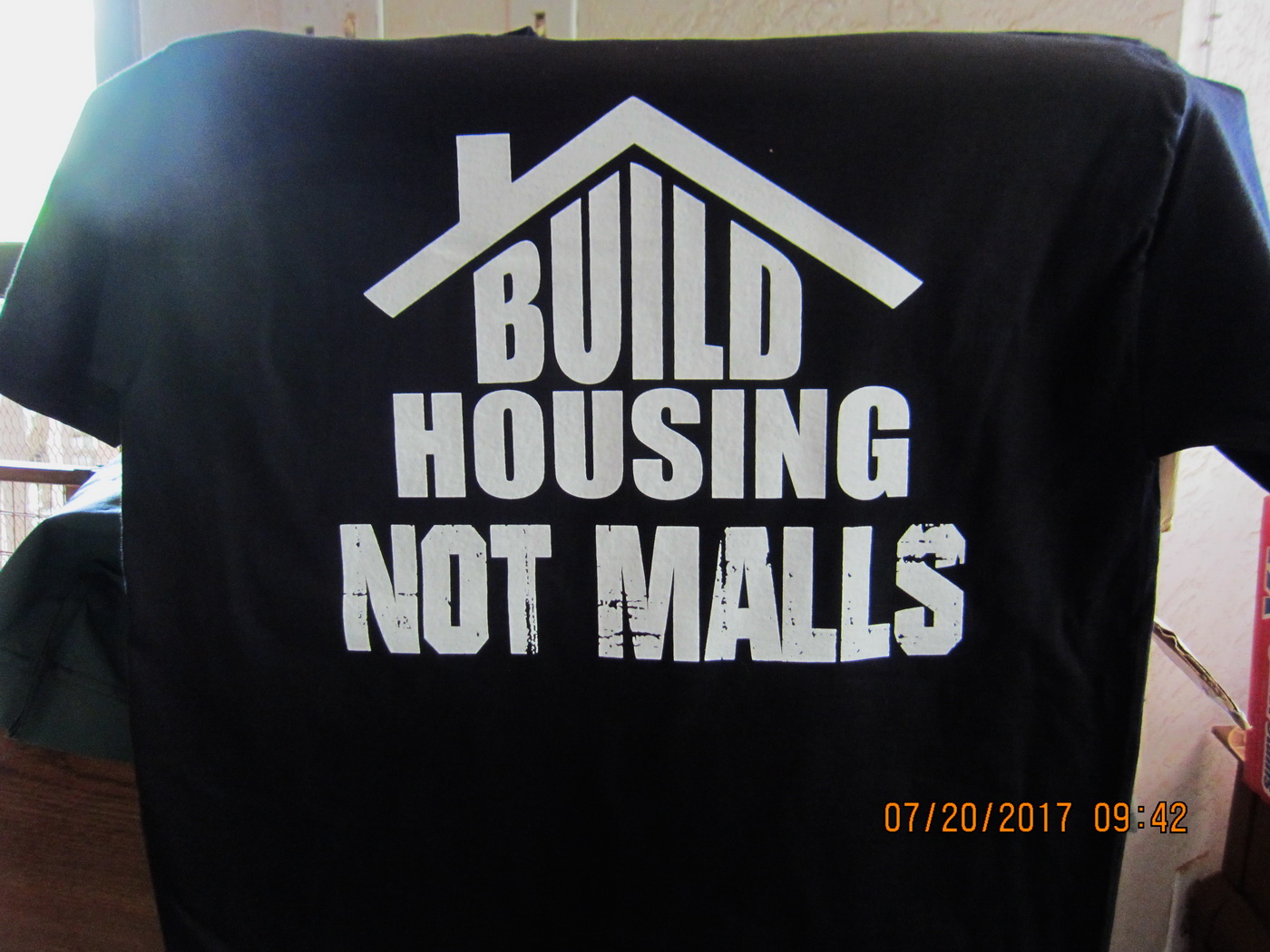 UPDATE 7/20/17  Day one pau;  nearly four hours of public testimony, with VAST majority against acceptance of FEIS. Back at 8:30 AM Thursday for deliberations and maybe decisions.  See  Thursday Morning’s Maui News Report

The state Land Use Commission listens to testimony from Kihei resident Vernon Kalanikau at the Maui Arts & Cultural Center on Wednesday afternoon in Kahului. The commission was taking testimony during a public hearing on whether to accept the projectâ€™s environmental impact statement. â€¢ The Maui News / MATTHEW THAYER photo

Albert Perez, executive director of the Maui Tomorrow Foundation, said he has reviewed many project environmental impact statements, and â€œI have never seen one that is so large with so little useful content. Rather than describing impacts, it is largely a self-serving recitation of the benefits of the project.â€

And that is specifically prohibited by Hawaii law, which says such a study should not be â€œmerely a self-serving recitation of benefits and a rationalization of the proposed action,â€ he said, quoting the state law.

His testimony was an example of the opposition that persists for the proposed 75-acre north Kihei development, formerly called the â€œmegamallâ€ project, though now downsized to 226 apartment units, 58,000 square feet of light industrial space and retail, office and business/commercial development limited to 530,000 square feet. The project would be located mauka of the intersection of Kaonoulu Road and Piilani Highway, and it would border Kulanihakoi Gulch on its southern side. 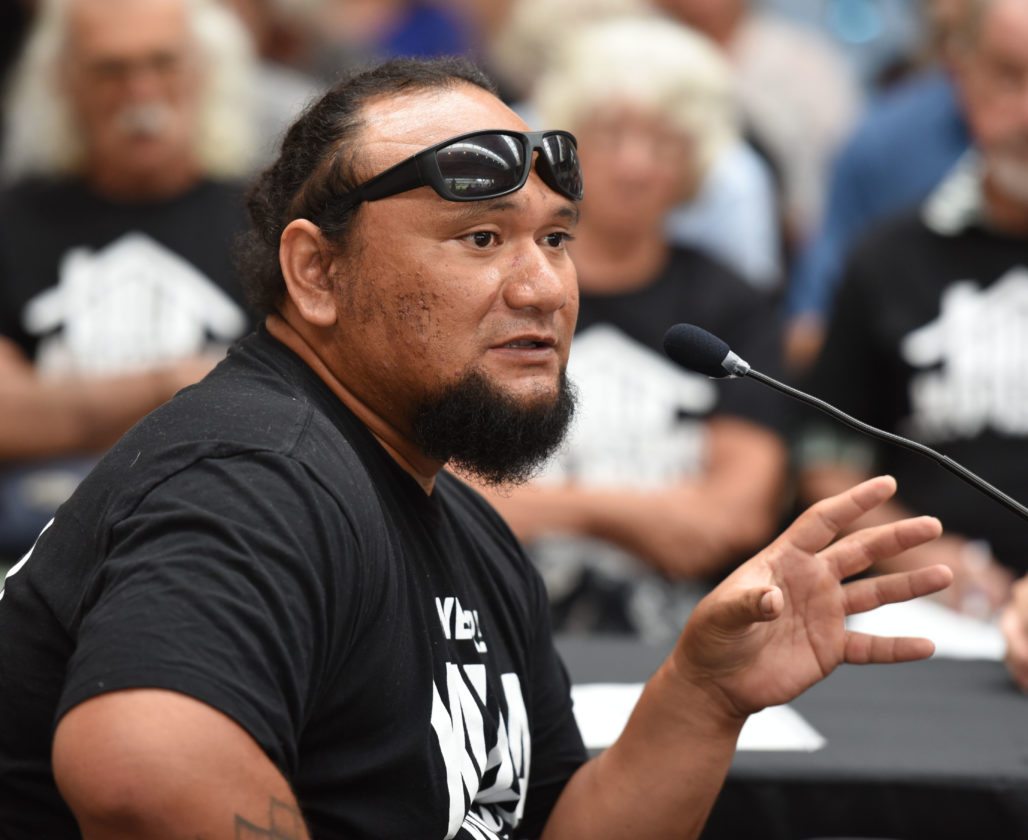 The commission recessed after nearly three hours of testimony. The panel is scheduled to return at 8:30 a.m. today to hear a project presentation by developer Sarofim Realty Advisors of Dallas. The commission will reconvene in the Morgado meeting room on the second floor of the Maui Arts & Cultural Center.

Kihei resident Ronald Vaught said former project plans were rejected â€œand rightly so,â€ but â€œnow this developer has brought the plan back into focus. Theyâ€™re going to bring an excellent selection of commercial and industrial businesses, and I welcome them into my neighborhood.â€

Vaught added that: â€œI have read this EIS, (and) I see that much work has gone into it and strongly believe it to protect me and my neighbors.â€

Kihei Community Association President Mike Moran said the nonprofit community group opposes the project in its current configuration. He pointed out that the Kihei-Makena Community Plan was designed to â€œprevent further sprawl and concentrate commercial activities makai of Piilani Highway.â€ And, the proposed Piâ€™ilani Promenade site is not among commercial sites approved by that plan, he said.

â€œOur community needs affordable housing, like the 100 percent affordable rental housing directly across from this site . . . not a huge, unneeded commercial entity with a smattering of such housing,â€ Moran said.

â€œI did not believe that the scale and type of retail that was previously proposed was appropriate,â€he said. â€œHowever, I would like to see Piâ€™ilani Promenadeâ€™s EIS accepted by the Land Use Commission, to give this project the chance it deserves to provide the community-based industrial, apartment and commercial uses it is promising.â€

Cardone said commercial space in South Maui is â€œvery much needed,â€ with parcels in the Piilani Business Park and Kihei Commercial Center subdivisions already developed. The vacancy rate for industrial space islandwide is less than 1 percent, he said.

He was contradicted by a number of other testifiers, including Haiku resident Mark Sheehan, who talked about nearly empty â€œghost malls.â€

Kihei resident Gary Passon, a member of the Kihei Community Association, said the projectâ€™s economic models for the need for more than 500,000 square feet of big box commercial retail space in Kihei have not been adjusted to â€œaccurately reflect the changing retail landscape nor the specific economic and social environment in Kihei.â€

With underused retail space along South Kihei Road and the Downtown Kihei project coming online soon, â€œthe megamall will significantly upset the economic balance in the community by unnecessarily increasing the available space by a significant amount,â€ he said.

Chantal Dugied Lonergan, representing the Construction Industry of Maui, a trade organization of the Maui Chamber of Commerce, said she represented 1,530 working-class residents who support the project.

â€œWhen clear requirements are communicated, quality projects can be developed to meet our community expectations and make an overall positive impact on our quality of life,â€ she said.

Rod Weltman, another member of the Kihei Community Association, said that while the South Maui community plan calls for reducing traffic on Piilani Highway, the Piâ€™ilani Promenade project would increase traffic by drawing customers from other parts of the island to the area.

â€œThe population of South Maui is not sufficient to support all the retail space already available,â€he said. â€œNorth Piilani Highway is a choke point for all traffic into and out of South Maui.â€

The level of traffic congestion already is at unacceptable levels at times at seven intersections, including some that would receive more vehicles from the Piâ€™ilani Promenade project, Weltman said.

The projectâ€™s planning fails to recognize the true extent of flooding problems, reef damage and â€œwhat a massive culvert system would do to amplify it.â€

And, he took offense with project cultural advisers who surveyed the development area but found nothing of significance.

â€œReally?â€ he asked. â€œI have no degree but know that the slope from Kula down to Kula makai was instrumental in judging weather patterns, land navigation and reading the stones, not to mention all the rock structures we came across. But â€˜no significance?â€™ That makes me sad that one is willing to kill the seed of opportunity for our now and tomorrow generations.â€

Fisherman Basil Oshiro said the projectâ€™s final environmental study is incomplete because, among other reasons, the developmentâ€™s planned altered drainage and grading plan â€œwill damage or affect the cultural sites in the construction area.â€

â€œThe Kaonoulu gulch is a natural drainage, and there are cultural sites in it,â€ he said. 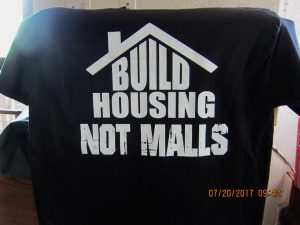 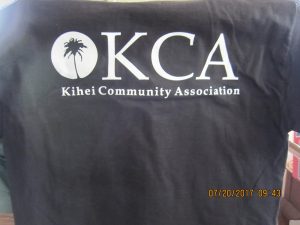 7/14/17 #kihei
In the last ten years or so, there has been no more controversial individual item in our district than what is commonly called the â€œMega Mallâ€. The Dallas, Texas-based owner Sarofim Realty Advisors names it the Pi’ilani Promenade (North and South), but the State Land Use Commission defines it as Kaonoulu Ranch consistent with the name at the time of the request for the land classification change from the State Commission, back in 1995.

The State Land Use Commission hearing on this proposed project will be this Wednesday, July 19 with tentative commencement at 2:00 PM at the Maui Arts and Cultural Center, Morgada Hall. For much of the historical discussion around this project see http://luc.hawaii.gov/pending-petitions-2/motions/a94-706-kauonoulu-ranch/ and https://gokihei.org/?s=mega. Here is some current discussion of the project: https://www.mauinews.com/opinion/letters-to-the-editor/2017/07/demand-integrity-in-government-respect-for-county-community-plans/.

For the agenda, see  https://luc.hawaii.gov/wp-content/uploads/2012/09/LUC-DraftAgenda-JUL-19-20.pdf. The FEIS is here: https://gokihei.org/piilani-promenade-aka-megamall-feis-june-2017.

No, we do not know how long the Commission plans to continue the meeting on the first day Wednesday; it depends on how much testimony is offered and the overall time consumed if the Commissioners have questions for testifiers. But as you see, they plan to continue at 8:30 AM Thursday morning. We cannot determine if they will still be taking testimony Thursday, but we would NOT count on that.

The basic matter is will the volunteer commissioners from across the state (one from Maui) accept or reject the Final Environmental Impact Statement (FEIS), and yes: KCA plans to attend both meetings, and recommends anyone interested do so as well if at all possible. 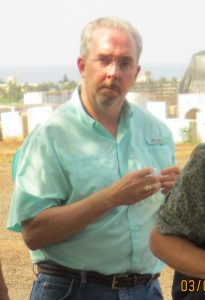 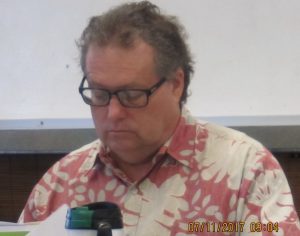 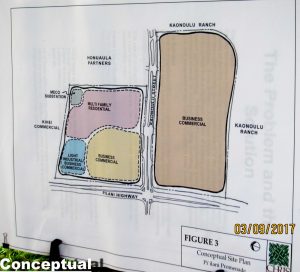 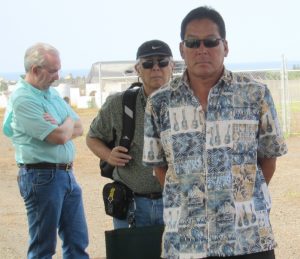 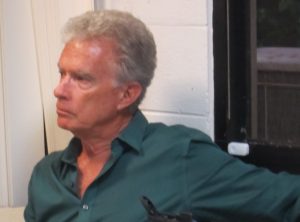 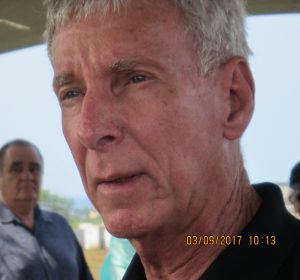 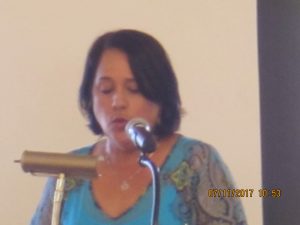 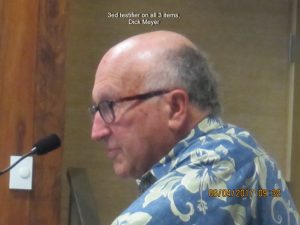 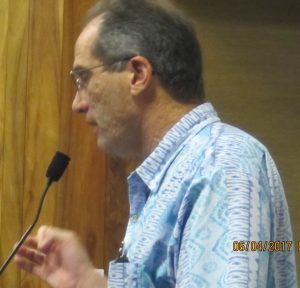 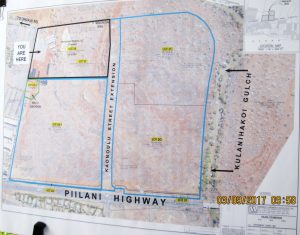 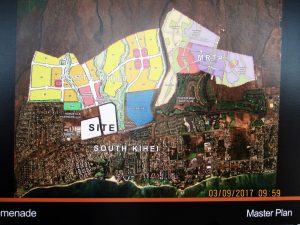 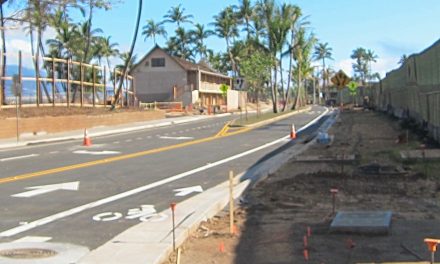 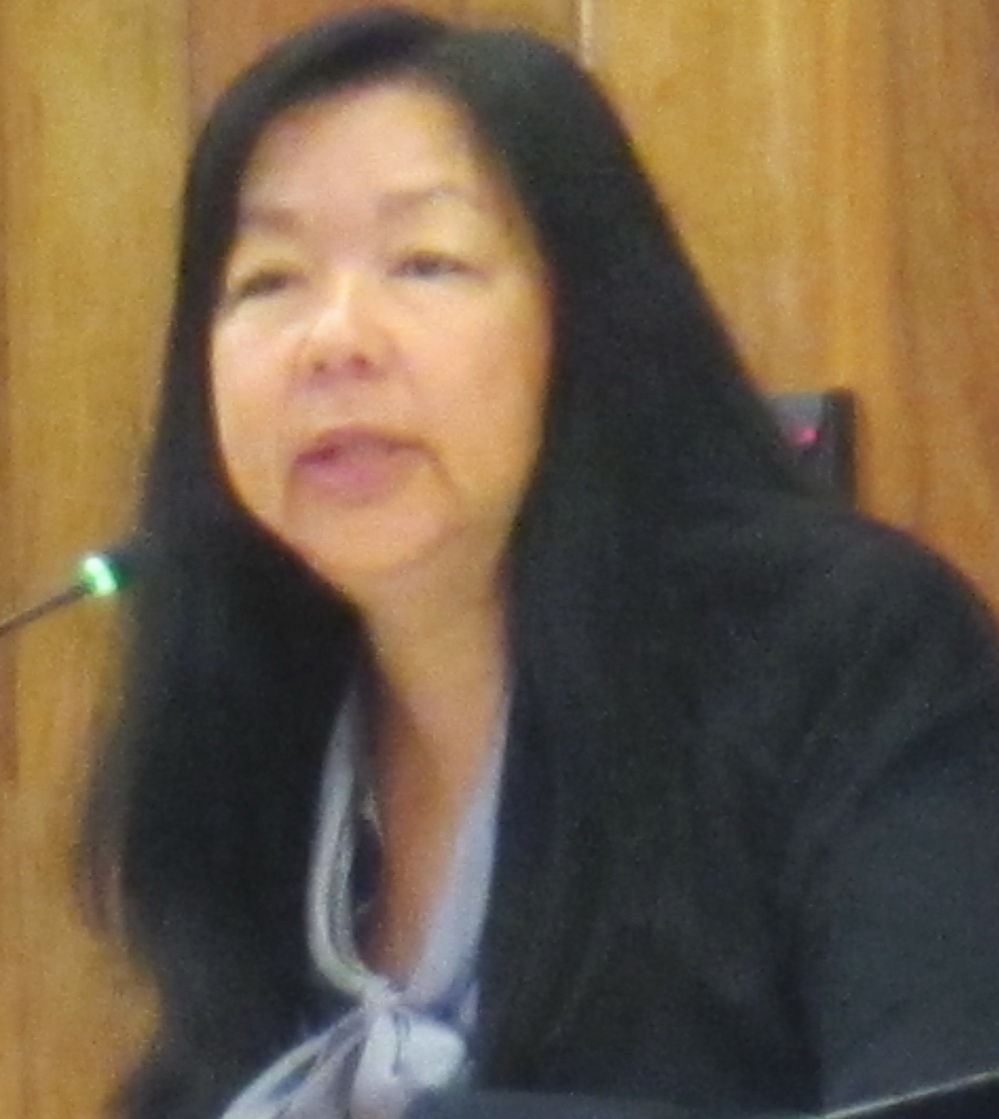