More retail options coming soon to former ranch lands near you… “We didn’t get community input, but I’m confident they will like it.

Some visitors may find comfort along avenues lined with familiar stores and brand-name outlets at hotels. The more adventurous tourists may seek out small, niche businesses on Maui. But regardless of whether you fall within the “corporate” or “locavore” consumer category, tourist and retail markets are gaining momentum after years of decline.

According to a report from Hawai‘i Economist Dr. Leroy Laney, Maui experienced an “impressive rebound in tourism” in 2010, ahead of all other counties in the state. But there remains “a dichotomy in Maui retailing between tourism retail and the local market,” he said. Although retail tourism was strong in 2010, some regional malls geared toward residents experienced closures or at the least, “mild declines in sales.”

Eclipse Development Group CEO/President Douglas Gray is no stranger to developing destination retail areas. He is proud of the municipalities where they helped create “a sense of place” within “prominent shopping center developments.” The company has championed projects that have “stymied other developers,” according to eclipsedevelopmentgroup.com.

Eclipse purchased “prime property” in North K?hei (see last week’s front page story, “Retail Centers Set Mauka of Pi‘ilani Highway”) and has proposed two projects—a retail center and an outlet mall—on 75 acres adjacent to the planned K?hei High School. Six to seven of these acres will be dedicated to the state and county to satisfy certain land use requirements.

The site, which will be dissected by the first increment of future K?hei-Upcountry road, is estimated to include over 703,000 square feet of retail and restaurant space, and 3,700 parking stalls.

In 1995, Kaonoulu Ranch received approval from the state Land Use Commission to allow for industrial use and sold parcels to a Mainland company that was never able to develop the lots.

During January’s K?hei Community Association (KCA) meeting, Maui County Planning Director Will Spence said he had not seen the plans, but he believed landowners had worked hard to receive the light industrial zoning classification. The unique category permits various business uses, without design restrictions, and can border areas zoned for affordable housing or public, quasi-public uses, like a school.

“It’s like a pyramid zoning design—they can pretty much do whatever they want,” said KCA President Jon Miller.

Pyramid zoning allows a range of usages but requires extremely careful planning and consideration of land use elements. County Council members in the past have proposed removing this kind of zoning, also known as “stacking,” but have been unsuccessful thus far.

“We have a very complicated land use scheme here—layers and layers,” said Spence. “I’m not advocating red tape, but we need to look more closely at projects like these… ”

If there’s anyone on Maui who has worn many hats when it comes to the land and its developmental properties, it’s Charles Jencks of Honua‘ula Partners LLC, who currently serves as an interim commissioner on the state Land Use Commission (LUC) since replacing mayoral candidate Randy Piltz.

Eclipse is working on the site contract with local representatives such as Jencks (a consultant for Goodfellow Bros. Inc.) who has spearheaded projects in the area and worked with past landowners.

Jencks said the value of the offsite improvements is approximately $20 million and includes work on utilities, intersections and roadways, such as the first of three projected increments needed to build the K?hei-Upcountry road.

Gray hopes this will “put the pressure” on the state and county to get the remainder of the highway built. “No one wants a road to nowhere,” he said. “We hope to develop this destination area for residents and tourists, and make the intersection one of the island’s largest… ”

“Companies like Goodfellow try to get people back to work… projects like these can do just that,” said Jencks.

“This project should help the economy… nearly 600 construction professionals could be hired,” said Gray. “The centers may employ 1,000 to 1,100 when completed.”

Previous owners covered much of the entitlement process for the lands, and new ownership does not necessarily trigger a need to perform environmental impact statements, especially since no governmental funds are used.

“It’s really the job of the county to set rules and define plans to also meet community desires,” said Miller. “That way, developers and residents have a clear view and plan set in place.”

“We didn’t get community input, but I’m confident they will like it,” said Gray, adding Eclipse is still exploring potential developmental avenues but intends to start construction soon. He said he has never seen “a community dislike what we build.”

Jencks admits there’s “financial uncertainty” in this economic climate, but as plans evolved, focus was put on resourceful retail.

“We have to face the fact South Maui is growing… demand will be there,” Jencks said. “I believe the goal here is to develop a self-contained community, where residents don’t have to go to Kahului. From a planning perspective, in the long run, this is a very efficient development.”

“Our company doesn’t just slap something up,” said Gray. “Not about the bottom line… it’s about being proud of our work, and having communities feel the same.”

Check out Maui Weekly’s “The Dish From Trish” blog for more on the projects and Jencks’ progress regarding the area’s Kaonoulu Light Industrial Subdivision and Honua‘ula Partners’ affordable housing plans. Visit eclipsedevelopmentgroup.com and www.gokihei.org. 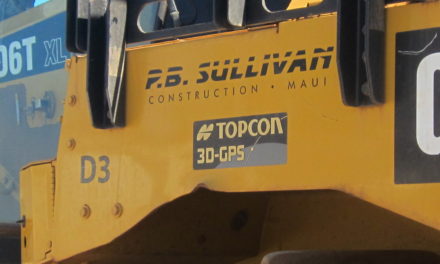 Is This the First Physical Action for PWC’s Kenolio Apartments Construction in North Kihei?