It was a packed house at the Kihei Community Associationâ€™s (KCA) monthly meeting on Tuesday, Aug. 16, at the Kihei Charter Middle School on Lipoa Street.

After failing to show at a recent Kihei public meeting of the Maui County Charter Commission, the community arrived in full force to hear reports on the status of new Maui Electric Company (MECO) proposal for transmission lines from Maâ€˜alaea to Wailea and two new power stations, all to be located along Piâ€˜ilani Highway.

Also on the agenda and leading off the meeting was a review of the newly proposed Maui Planting Plan offered by its primary author, Certified Arborist Ernie Rezents. Rezents outlined the upcoming third edition of the plan which is expected to be published late this year or early next year.

The new plan will exclude the protection of invasive species; include a proposal that parking lots have large, crown shade trees; and include a calculation of the problems caused by trees that are lost, such as reduced wind abatement, cooling shade, Ozone protection and the interception of storm water.

According to Rezents, shade trees in retail parking lots are valued not just for their esthetic appeal. â€œResearch shows that customers come from further, stay longer and spend more where trees shade the parking lot,â€ he said.

Next at bat and facing a skeptical crowd was Cheryl Okuna, senior associate at Munekiyo & Hiraga, a planning consultancy and project management firm. She presented a thorough and balanced explanation of the MECO plan for the proposed transmission lines along Piâ€˜ilani Highway and two new substations in Kihei.

One substation is planned south of Ohukai Road; the other is to be located across from Kamaliâ€˜i Elementary School. The estimated cost for the two substations is $15.7 million with completion set for December 2015.

Seventy-foot high steel poles will carry the transmission lines from the existing MECO power plant in Maâ€˜alaea along Piâ€˜ilani Highway.

The cost of the overhead lines is estimated at $21 million. If the lines were placed underground, the cost could rise to as much as $80 million. MECO will need a Special Management Area Permit for the project and will voluntarily procure an Environmental Impact Statement, although it is not legally required for the project.

Existing law mandates that the Public Utilities Commission (PUC) choose the lowest-cost alternative for proposed power projects of this nature. KCA meeting attendees were very vocal about the limited choices they were presented.

Joining the panel at the invitation of Miller was MECO Principal Engineer Garth Turley, a five-month Maui resident, who sought to answer questions about the option MECO has offered the community.

Miller, who believes MECOâ€™s poles and lines will degrade the beauty of the island and obstruct the view plane from South Maui to Upcountry and HaleakalÃ¤, suggested that other less intrusive routes were available to MECO.

Turley focused on the increasing demand for power in South Maui. â€œIn this area, we are already at the point that if we lose a substation, we would have a difficult time to bring on more load, or in other words, we could have rolling brown outs. We are at the point now where we are having a bad time, so if any more development comes on, you will need more power.â€

In response to an audience member who said that tourists did not come to Maui to see power poles, Turley responded, â€œTourists have power lines in their backyards, too.â€

Miller promised that the KCA would talk to elected representatives and advocate for an underground plan. County Council member Don Couch announced he will ask the PUC to hold a community meeting in Kihei to hear what residents think before making a decision with such significant potential impact. 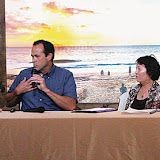 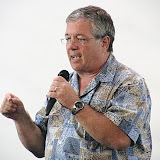 South Maui County Councilmember Don Couch announced he will file a request with the Public Utilities Commission that any hearings on the MECO proposal to service the power needs of South Maui be held in Kihei. â€œThis is a decision about South Maui and it cannot be made on Oâ€˜ahu,â€ he said. (Photo From Maui Weekly)

Who is neglecting the trees in Kihei?