NOTE: There will be a correction of the last sentence in this article 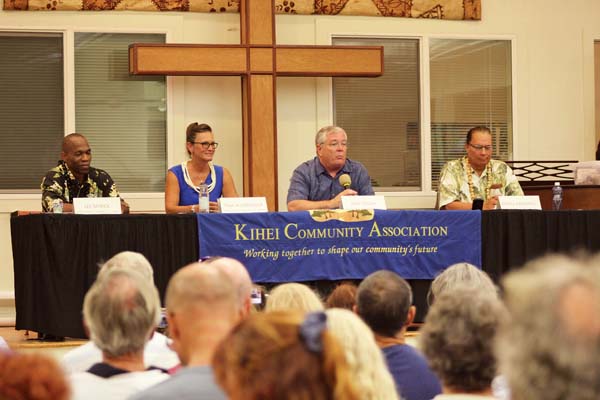 KIHEI â€“ Candidates for the South Maui state House seat took on topics of nearshore water quality, the growing visitor industry, use of the Piilani Promenade project site and other issues during a candidate forum held Tuesday night at St. Theresa Church.

Hosted by the Kihei Community Association, the forum featured Democrats Don Couch, Lee Myrick Jr. and Tina Wildberger and nonpartisan candidate Daniel Kanahele, all of whom are running to replace Rep. Kaniela Ing in the House District 11 seat, which covers Kihei, Wailea and Makena. Ing is vacating the seat to make a run for Congress.

With less than a month to go before the Aug. 11 primary election, more than 100 people came out to hear the candidates speak. The four carry a diversity of experiences â€” Couch as an executive assistant to the mayor and former County Council member; Kanahele as a landscaper and community activist; Myrick as a special education teacher, small business owner and veteran; and Wildberger as a small business owner and former campaign manager for Council Member Kelly King.

Speaking on the growth of the tourism industry, the candidates said Maui needed to diversify its economy and to get the state to prioritize infrastructure projects on Maui. In 2017, visitor arrivals by air to Maui totaled 2.7 million, a third straight record year, while visitor spending on Maui also hit a record $4.8 billion.

â€œI think we really need to diversify our economy here and not depend on the tourist industry, because itâ€™s so susceptible to global changes,â€ Kanahele said. â€œI think we should try to market Hawaii for a different class of tourist who will come and spend a lot of money, but not this industrial brand.â€

Wildberger, whose experience with tourism comes through the food and beverage industry, said what she found â€œmost alarmingâ€ was hearing from Oahu legislators and Hawaii Tourism Authority officials that the Neighbor Islands need to â€œshare the loadâ€ of tourists.

â€œWeâ€™re already sharing the load,â€ Wildberger said. â€œWe need to go to the state and help them understand that we need the infrastructure, we need the roads, we need to be able to provide services, we need bathrooms in Hana. Thereâ€™s a lot of things missing, and theyâ€™re just bringing in a new plane load every seven minutes.â€

Couch mused about a tourism cap but said it might be difficult to find a legal route.

â€œWeâ€™d have to get a carrying capacity study to see how much we can afford,â€ he said. â€œWe certainly are, I think, close to capacity now, but that doesnâ€™t stop the airlines from coming here. So what we have to do is figure out a legal way to put some sort of cap if itâ€™s at all possible.â€

Myrick said that it â€œseems like everybodyâ€™s making moneyâ€ but the people who live here and criticized the money that leaves the state to benefit Mainland corporations.

â€œThe Maui visitor industry, they should get involved in regulating and doing whatever they need to do to protect or maybe help adjust the cost of living here for the people that live here,â€ he said. â€œI would like to see people who live here start getting something out of it.â€

Candidates also addressed the issue of water quality along South Mauiâ€™s shores, in light of a 2009 study by the federal and state government that detected wastewater plumes from injection wells along the West and South Maui shorelines. Researchers are studying nearly 50 sites in West and South Maui as part of the stateâ€™s 2018 Water Quality Monitoring and Assessment Report.

Couch said it would take a mix of things, addressing both the cesspools in Maui Meadows that contribute to ocean pollution, as well as reducing the use of injection wells, which he said the county is already doing.

Wildberger, a volunteer for the Maui Nui Marine Resource Council that is helping with the water quality report, said that the state Department of Health is â€œunderstaffed and underfunded.â€

â€œWe need to bring funding so that we can get the testing, so that we can solve these problems,â€ she said. â€œIf the Department of Health doesnâ€™t have the data, then they canâ€™t demand that we make some changes. Our up-slope injecting has got to stop.â€

Kanahele said he â€œalready did somethingâ€ about water quality, referring to a lawsuit he and three others filed in 2009 as the Pukoâ€™a O Kama Alliance to stop the countyâ€™s use of injection wells. The lawsuit filed in 2nd Circuit Court is still active, Kanahele said.

â€œWe need your support to fund that lawsuit and give it some light,â€ he told residents.

â€œI will prioritize it. I will move the funds,â€ he said. â€œIf they say we donâ€™t have funds thatâ€™s sitting around the state Capitol, I will reallocate it and just get it done.â€

Kihei Association President Mike Moran also asked candidates what they would like to see on the 75-acre site of the proposed Piilani Promenade mauka of the intersection of Kaonoulu Road and Piilani Highway.

After the community shot down a proposal to build a pair of â€œmegamallsâ€ on the site several years ago, developers redrew the plans as a housing and commercial project with 226 multifamily apartments; 58,000 square feet of light industrial space; and up to 530,000 square feet of retail, office and business/commercial development.

However, the state Land Use Commission rejected the projectâ€™s final environmental impact statement last July, and developers have expressed an interest in returning to the original plans of a 123-lot commercial and light industrial subdivision.

Myrick said heâ€™d like to see something on the site that would benefit the community.

â€œI know we hear that all the time, but we need leadership thatâ€™s going to start seeing it and saying it,â€ he said. â€œAs far as actually what I would do with the land â€” I would focus on doing something with all the problems we got now with Kihei high school not being built. I wouldnâ€™t try to spread ourselves thin and keep doing other projects before we work on the problems we already got.â€

Wildberger said she wanted to see affordable housing on the site and proposed changing the zoning from light industrial to residential.

Couch said that fortunately, the county wouldnâ€™t have to change the zoning because light industrial allows for apartments.

â€œThey could build affordable housing now,â€ he said. â€œWhat we have to do is either buy it from the owner of the land or try to convince the owner of the land to do that. Itâ€™s their property at this point with certain entitlements, but thatâ€™s the way to get them out of the mix, is to go ahead and buy the property.â€

Kanahele pointed to his record of fighting against the project along with the Maui Tomorrow Foundation and South Maui Citizens for Responsible Growth.

â€œNow you folks have a say in whatâ€™s going to be built there, and thatâ€™s what I want to get out of this,â€ he said.

Variances & Appeals Board Hearing on Malls this week 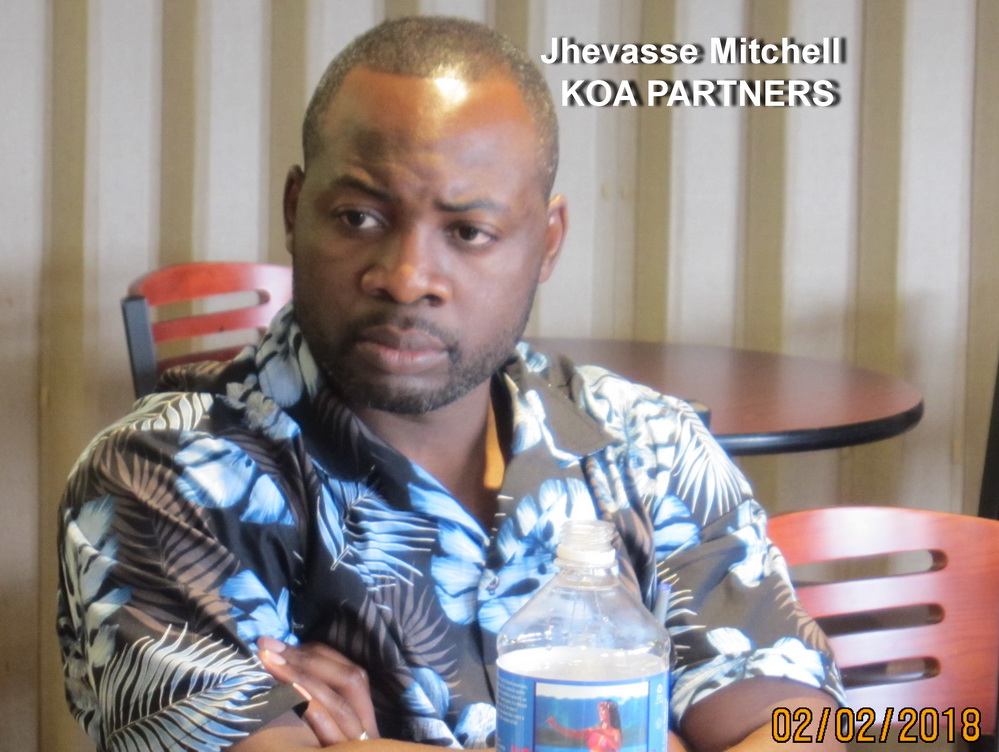 WHAT MAY BE NEXT FOR THE “MEGA MALL” SITE IN NORTH KIHEI?