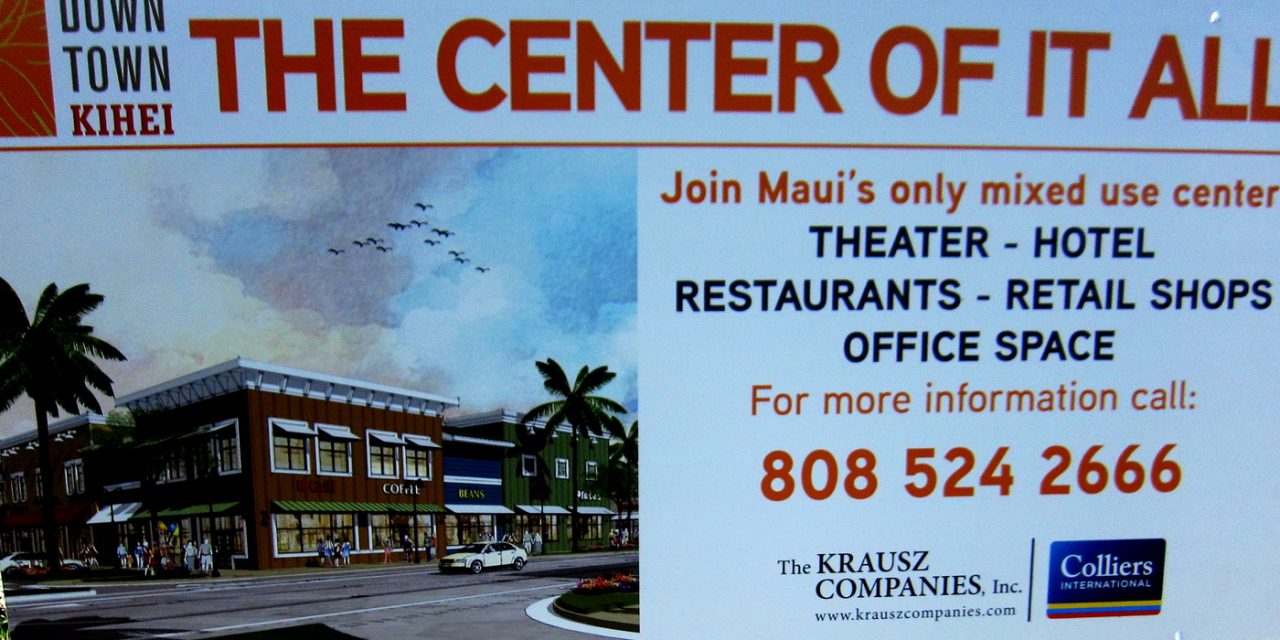 UPDATE 6/12/20 Our Design Review Committee met (via zoom) with the Krausz Companies representatives once again as we have for well over a decade on their Downtown Kihei Project along both sides of Pi’ikea makai of Liloa. Today was concentrated on the revised South side for a newly proposed 100 % affordable rental housing project.

We welcomed this change as the overwhelming need for affordable housing and the lack of need for more commercial is apparent. That makes this an improved project. The location is infill something KCA has asked for continuously to lessen sprawl. This is a good place for housing, near lots of services, walkable to school, the grocery store, post office, hardware store, parks and beaches etc. and is directly on Maui bus route. There are also several other housing projects in this area. They will be using R-1 water as they are right next to access. It is also on the NSCR which for very long term planning will be important for multimodal transportation. It is a mixed use project, something for which KCA has long advocated.

But we also suggested  numerous important improvements to the four story and other buildings to insure they are practicable, efficient and environmentally friendly. We see this as needed to enhance and sustain the outcome of the development. We are striving to reduce hardscape and further consolidate the green potential of the site. The units should have have cross ventilation to take advantage of our trade winds for cooling, reduced energy reliance and for a healthy environment. This would require open corridors with some type of opening on both sides of the unit such as jalousies or awning windows along the access hallways. All windows except those facing north are currently required to have shades .

We believe this is achievable and beneficial to our community.

We look forward to continued collaboration with Krausz, as they have been open working with KCA for a long time. 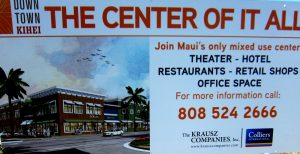 For several years now, the Krausz Companies, a real estate development company based on the mainland, has been planning the downtown Kihei construction project which is intended for both sides of Pi’ikea Avenue, makai of Liloa Drive.

For the most part, the building up had been concentrated on the North side of the road, and the South side was to be determined.

Over the past decade, there have been many changes to the area, with Maui County laws and regulations, as well within the business climate. The Krausz plans for the project have fluctuated to match those multiple changes.

For 2020, Krausz has a major new proposed action: an affordable rental  residential project on the South side of the roadway.

Hale O Pi’ikea would be  a ninety unit building with one, two and three bedroom apartments, constructed on 2.6 acres with a total of 214 parking stalls. The project would include a 6000 square foot community center, with some commercial entities as well.

Reportedly, this development would be handled by a new partner, Ikenakea – 3Leaf, an organization which works to develop affordable housing for communities in Hawaii and California.

Krausz had scheduled a meeting for February 18th with the Kihei Community Design Review Committee for an overall update.  The meeting was changed to March 25th to coordinate with another entity. Then everything was cancelled due to the COVID-19 virus related travel restrictions. Now we are expecting to have a meeting virtually. Stay tuned. 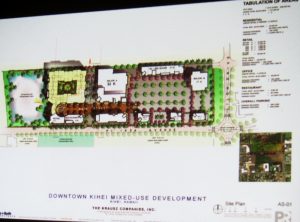 2017– foretelling of food court, which is currently functioning 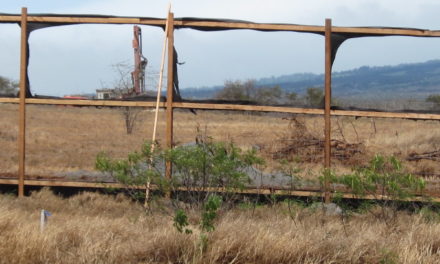 ACTIONS IN KIHEI BEFORE HURRICANE LANE ARRIVES THIS WEEK ON MAUI