The KCA has its committees set and its work laid out in lists. Now what is needed is people—members, new and renewed—to bring the plan to life.

The Kihei Community Association describes itself as “an organization of South Maui citizens working for and within the local community—and with government, developers and other community organizations—to realize and ensure the vision of Kihei as a town within a park.” On posters promoting the association’s monthly meetings, those words are followed by, “We’d like to work with you, too. Won’t you join us?” The plea, “join us,” echoed through many of the presentations at the meeting on Jan. 17.

Each board member made a quick presentation about one committee or group of projects, and the list was impressive, but one element of the message was always the same. “Come, help us make this happen.” KCA President David Frazier even dubbed 2006 “the year of the volunteer.”

South Maui Community Prosecutor Jerrie Sheppard, who has recently been recalled from that Kihei posting to regular deputy-prosecutor duties for the county, introduced 15 members of the Kalama Park Action Team (KPAT). She also introduced recently appointed acting Maui Police Captain Ramos, who stayed through the entire meeting, listening intently and participating. KPAT, Sheppard assured the crowd of over 75 local residents, will continue to patrol Kalama Park and to do clean-ups, brush reduction and other work needed to convince the drug dealers and other people abusing the park that “this is our park, not your place to do with as you will.”

Lt. Ramos (acting Capt.) reported that even after the KPAT patrol left the park, he had stayed on and… “It looks like they’re ‘onto your game.’ It stayed pretty quiet.”

Sheppard ended with, “Be part of our group. Join us. Do the patrol once. Then, if it’s not your thing, that’s OK.”

Joe Bertram then used the success of KPAT in reclaiming Kalama Park as an object lesson. “They came up with a vision, and what happened?” His answer was, that because of the vision for Kalama Park, we now have a whale we can be proud of there, patrols that are working to curb crime, funding to build a lighted walking path around the park and an improved skateboard facility in the works. The same success, he suggested, could be achieved throughout South Maui if enough people come forward to help the KCA board and committee members do their volunteer work.

A spokesperson from Pacific Whale Foundation (PWF) then announced the whale-related events planned for South Maui during the month of February. The annual Parade of Whales and Whale Day celebration will be Feb. 18. The Great Whale Count will be on Feb. 26. And a half-marathon and 5K run will be held Feb. 11, in cooperation with Valley Isle Roadrunners. For information on the parade, celebration and count—particularly volunteering to help with any of them—or to register for the races, call PWF at 249-8811. For more information on the races, call Merrill Kaufman at 280-3163.

The last community announcement before the KCA committee reports was from the Pump Don’t Dump group. “We’ve made progress with the help of a lot of people,” the spokesman said, urging more people to show up for demonstrations and otherwise pitch in. Details are available on the Web: PumpDontDump.com.

Board member reports began with a plea for increased membership from Barry Allison. Pointing to the pages of projects taped to the wall, he asked everyone to bring “10 friends.” Frazier added that the memberships that could be recruited would not necessarily have to be people willing to pitch in, reminding everyone that the voice of South Maui is heard in government through the numbers, meaning higher membership counts.

Open Space committee chair George Rixey spoke of the years that have already been put in protecting and planning Kihei’s open spaces and the progress made. The committee is currently working to select a professional planner to formalize plans that can be submitted as an amendment to the Kihei-Makena Community Plan. “We wanted to see a pedestrian-oriented community with some control of development,” he said, and suggested that we are moving in that direction.

Bertram spoke on behalf of the committee overseeing plans for streets, bikeways and greenways. He reported that the “stop the stoplights” program seems to be having some success. “We’re looking at roundabouts. We’re looking at traffic calming,” he said. He’s looking at “full funding for a permanent roundabout” and expanding the work on the South Maui Coastal Heritage Trail. He said he believes the greenway through Maui, formerly envisioned as a roadway and greenway, can still be put through the entire length of Kihei as a greenway trail. “We want to see this within a year, and we think we can do that.”

On the subject of parks, Tom Bigelow said that KCA “is going to take a little different approach.” Bertram added that, since the county doesn’t provide such a thing, “we’ll have our own South Maui parks commission.” Frazier said the issue is “close to [his] heart,” adding, “we have everyone coming over to use these parks. From Kahului to Kula—everyone comes.” He stressed the need to find funding to maintain the parks.

The committee formerly known as Ocean Concerns is now Environmental Issues, headed by Dave Mackwell. He spoke of the success the Pump Don’t Dump campaign is having and of the need to mitigate flood dangers, deal with seaweed accumulation problems, manage and nourish beaches, and handle the issue of the coqui frogs. He also suggested that a different management plan might allow the beach sand north of the Maui Lu to build a bigger beach rather than dumping itself into South Kihei Road there. Other issues will surely be taken up, but the committee really needs more volunteers and more attention from the community.

The committee for a High School in Kihei is chaired by Yvienne Peterson, who invited Marina Batham to speak with her. They reported significant progress toward having a high school built in Kihei by Everett Dowling. Dowling will have the site selected by Feb. 10, and will have contracts with most of the needed engineers as well as both site plans and floor plans “on his desk” by that date. Batham is speaking with Dowling weekly to keep herself and KCA apprised of progress. “I’m happy to say that Everett Dowling—who is getting private funding and getting legislation written—has made this his top priority,” Batham said. 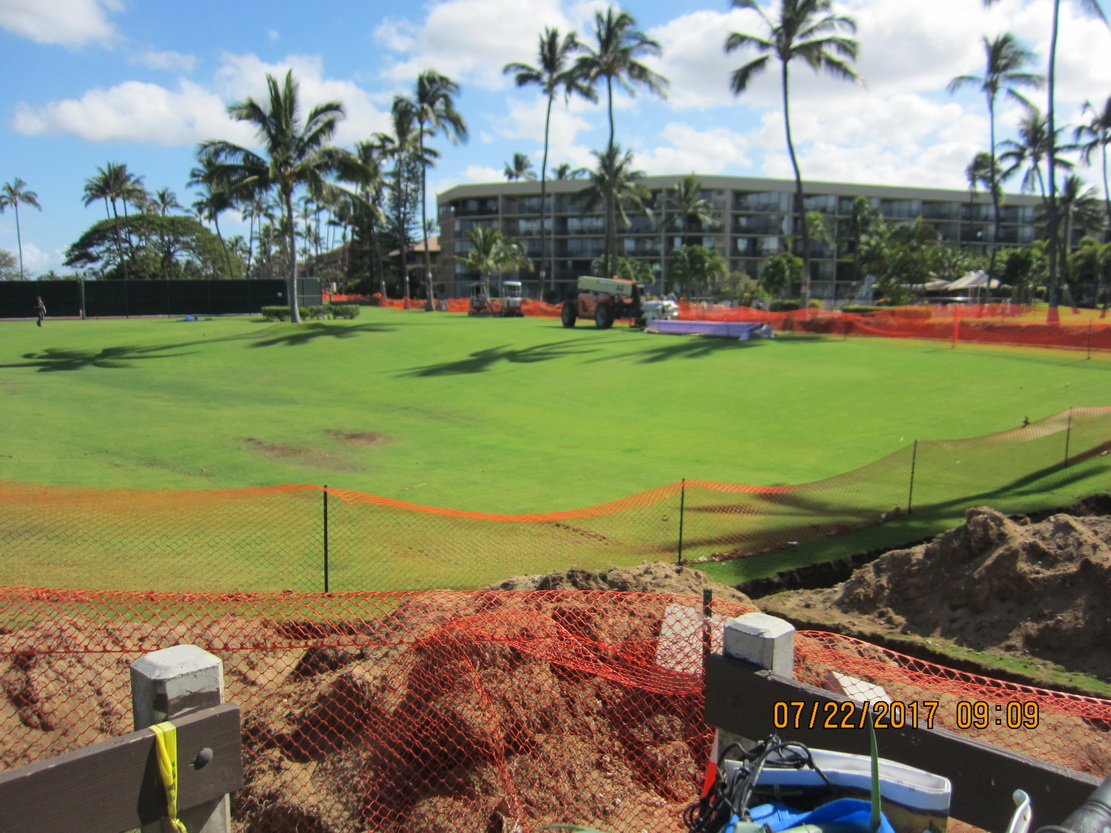 UPDATE Is this ”IF IT AIN’T BROKE, DON’T FIX IT?” especially at a cost of over half a million dollars?!!! 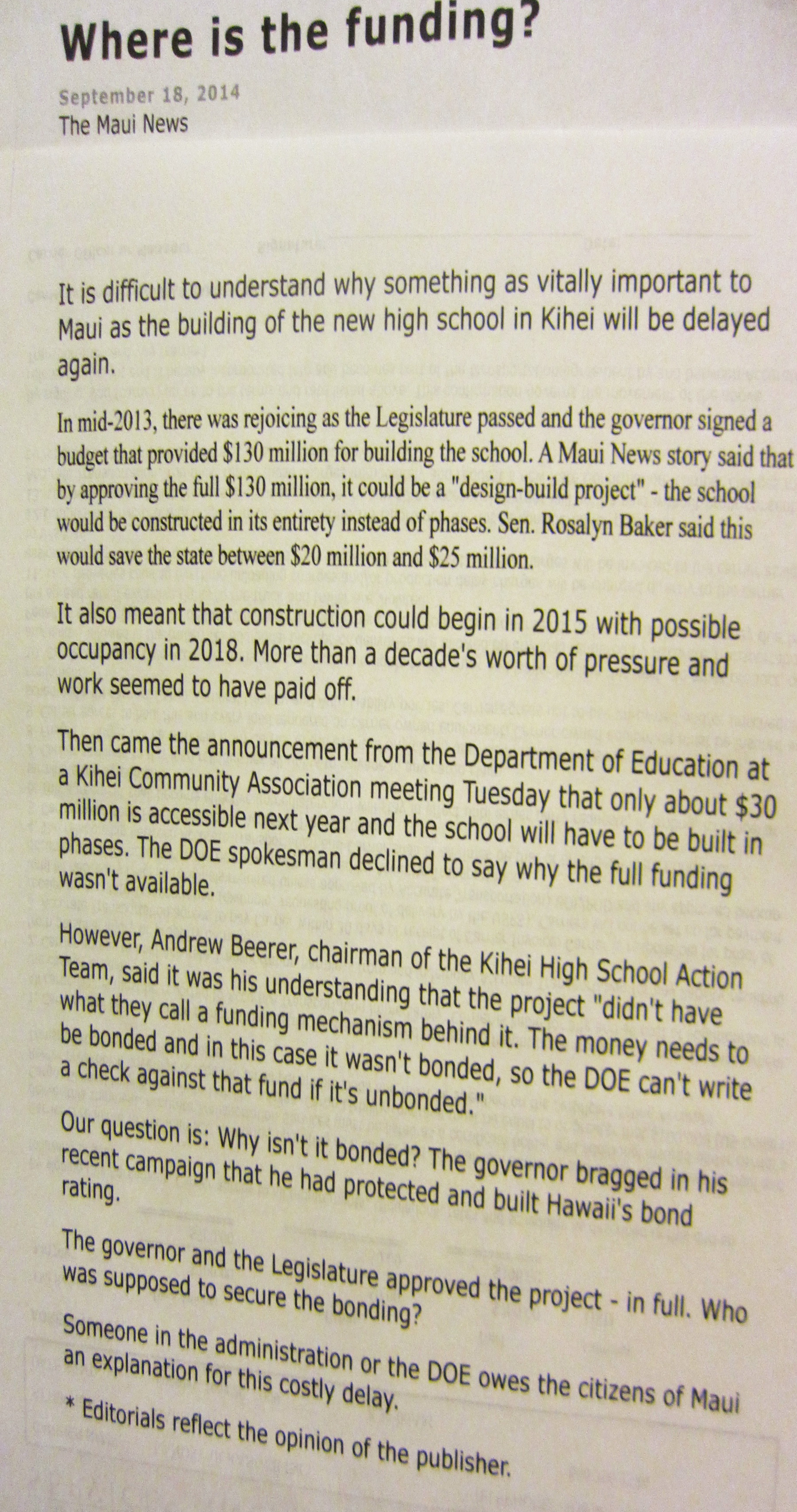