Panel discusses critical factors that need to be addressed now to avoid a future water crisis. â€œWe must rethink what we have been doing.â€

One of lifeâ€™s most fundamental needs, clean water, may soon be in short supply on Maui. And the way we dispose of our wastewater may be causing irreparable harm to our environment.

At the June 15 meeting of the Kihei Community Association (KCA), representatives of three environmental groups explained how our water is under assault from the land and the sea. And they sounded an alarm that critical issues need to be addressed now to avoid a future crisis.

Moran discussed the effects of allowing tour and charter boats to pump sewage into the ocean. â€œThere are a myriad of reasons for the deterioration of our reefs and beaches,â€ he said, â€œincluding pesticide and insecticide runoff, injection wells and poor construction practices.â€ But, a major factor, he said, is that charter boats are continuing to dump untreated sewage or sewage treated with formaldehyde and bleach into the ocean, fouling our beaches in South Maui.

Moran said the Pump Donâ€™t Dump group has had â€œmoderate successâ€ in drawing attention to the issue. Through their efforts, boats operating out of Maâ€˜alaea Harbor may pump sewage into pumper trucks for land-based disposal. The group advocates fixed or mobile disposal methods at all harbors and ramps with required usage by all boat operators.

Bowie explained how current practices, most notably disposing of treated sewage into injection wells, harms the reefs and environment, wastes water, threatens our health and harms our economy. She said the sewage, injected 200 to 300 feet underground at 15 wells on Maui, including three in Kihei, eventually makes its way into the ocean.

â€œThirteen million gallons of treated effluent is pumped into the ground every day,â€ she said.

She urged attendees to support the â€œDonâ€™t Inject, Redirect (DIRE)â€ Coalition, which is working to limit the use of injection wells while promoting recycling of wastewater, particularly while we are facing drought conditions, water rights issues and water shortages.

Bowie said that effluents flowing into the ocean promote the growth of algae, which chokes a basic economic engine of our tourism industryâ€”our reefs. Algae, bacteria and chemicals used in sewage treatment are also making us sick, she said, citing an increase in staph infections and other waterborne illnesses, which puts Maui well above the national average in hospitalizations.

DIRE advocates the establishment of a series of high-quality effluent (R1) lines to utilize recycled, treated and reclaimed water for purposes such as irrigation. Although she acknowledges the cost for such a system would be high, she said we canâ€™t continue â€œwasting million of gallons of water a day while things are bone dry.â€ In addition, she said, â€œIt may actually be less expensive to develop recycling water systems than to develop new water sources.â€

Knox gave an overview of watersheds, which she likened to the ancient Hawaiian land division system of ahupuaâ€˜a, which manages resources from the mountain to the sea. Â She discussed the federal Clean Water Act which, she said â€œhas a simple goal: fishable, swimmable water.â€

Knox explained the distinction between â€œpoint and non-pointâ€ pollution sources. Point sources, she said, are more easily monitored. â€œThese include pipes or wells where actual samples may be taken,â€ she said. Non-point sources are more difficult to measure. These include runoff from agriculture, construction sites and golf courses and contamination from cesspools and septic systems. Knox concurred that the use of injection wells is very problematic.

The three presenters fielded questions from the attendees. Most centered around obtaining funds to deal with the issues, raising community awareness and involvement and enlisting county and state elected officials in the effort.

â€œJust throwing up our hands and saying it costs too much doesnâ€™t make sense,â€ said Bowie. Issues related to our water â€œhave to be part of the budget. We have to demand our elected officials take care of this.â€

â€œThe mayor has said the issue is not a matter of money, but a matter of priority,â€ added Knox. Panel members said federal grants may be available and that use fees should be revisited. Bowie also suggested enlisting the visitor industry, which has a vested interest in making sure our beaches are safe and clean.

A builder complained that while his current development project has committed to utilizing reclaimed water, â€œthe Department of Health has been difficult to work with and the process has been expensive and time-consuming.â€ He suggested simplifying the county processes related to utilizing recycled water.

All three presenters urged residents to get involved and said the current situation is unsustainable. Moran reminded attendees that it is an election year and the candidates are listening. â€œWrite letters and make phone calls,â€ he said. â€œTell them we want clean water!â€

â€œWe need to take a more holistic approach,â€ concluded Bowie. â€œPerhaps we should have a water marshal. Any way you look at it, we need a big change.â€ When it comes to clean water, she said, â€œWe must rethink what we have been doing.â€ 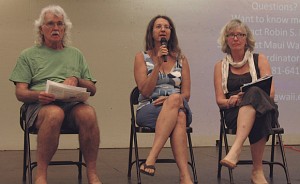 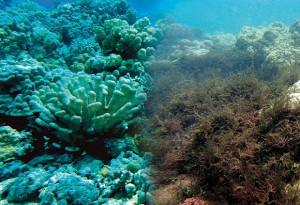 Maui Tomorrow Executive Director Irene Bowie explained how current practices, most notably disposing of treated sewage into injection wells, harms the reefs and environment, wastes water, threatens our health and harms our economy. Shown in the photo above, a healthy reef (left) contrasts with a reef choked with algae and chemicals. 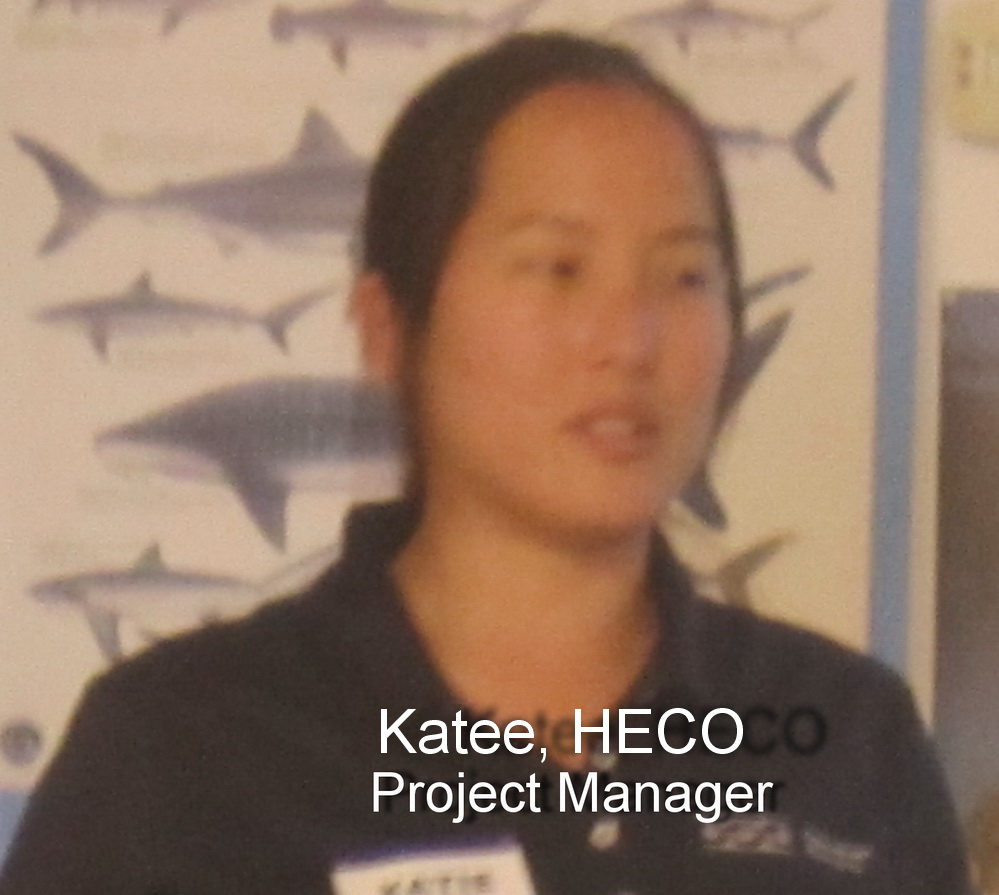