Officials share information and hear concerns about the declining reefs from community members. â€œWe need to be aware of our actions.â€Evidence that our coral reefs are in trouble is literally all around us. In 1972, the reefs near Maâ€˜alaea Bay on Maui were described as being â€œstriking in their diversity and in the presence of rare coral species.â€ But by 1993, according to officials at the state Department of Land and Natural Resources (DLNR), that coral cover had degraded to 50 to 75 percent. Today, they estimate the coverage to be only 8 percent. The collapse of our reefs, they said, is occurring on a global basis.

The state of our reefs and steps that can be taken to protect them were addressed at the Kihei Community Association (KCA) meeting on July 15. Officials from DLNR, the University of Hawaiâ€˜i, the Coral Reef Alliance and Maui County attended to share information and hear concerns about the reefs from community members.

â€œWe are seeing a lot of stress and decline in our reefs,â€ said Russell Sparks, an education specialist with the Aquatic Resources Division of DLNR. â€œWe need to make â€˜social changesâ€™ in the way we do things. When it rains, dirt washes onto the reefs. When we irrigate, fertilize, even flush our toilets, the reefs are affected.â€ We can dramatically reduce these actions without large monetary investments, he explained.

Brian Parscal of the UH Botany Department shared information about his teamâ€™s efforts to remove alien algae from coral utilizing an experimental tool he calls a â€œsupersucker,â€ which has been utilized successfully at Kaneohe Bay on Oâ€˜ahu. Residents and visitors may see the team in South Maui in the future attempting to remove algae that has washed up on beaches.

Liz Foote of the Coral Reef Alliance urged the public to become aware, informed and involved in preserving the reefs. â€œHalf of the coral reefs under U.S. jurisdiction are in poor or declining condition,â€ she said. â€œPollution, over-fishing, climate change and coastal development are taking a toll. We want people to get involved and make a statement.â€

â€œIf the present rate of destruction continues, 70 percent of all coral reefs could be destroyed by 2050,â€ said Kuhea Paracuellas, environmental coordinator for Maui County. â€œThe reefs provide an estimated $375 billion worldwide in goods and services,â€ she explained, ranging from food and pharmaceuticals to tourism, livelihoods and other revenues.

She shared a number of statistics: Although only 1 percent of the worldâ€™s surface is covered by coral reefs, they shelter 25 percent of all marine fishes. Scientists estimate there are 7,000 species in Hawaiâ€˜iâ€™s reefs, 25 percent of which are found nowhere else on Earth.

Paracuellas is working with a task force of 40 individuals to raise awareness about the issue. The group initiated an effort to declare 2008 the â€œInternational Year of the Reef.â€ The task force has developed steps that can be taken to ensure the survival of the coral reefs. They recommend learning about and following traditional Hawaiian land use practices, a â€œlook but donâ€™t touchâ€ approach to the reefs and avoiding feeding fish to allow them to fulfill their natural role as grazers. They ask beachgoers, divers and snorkelers to stand on the sand, rather than the reef. â€œAfter all,â€ said Paracuellas, â€œthey are living things.â€

Additional recommendations are to anchor boats in the sand only, deposit trash in proper receptacles, avoid transporting marine pests by keeping gear clean, use eco-friendly products, harvest only what you need, and learn and obey Hawaiâ€˜iâ€™s rules and regulations. The officials urged people to report violations to the DLNR at 643-DLNR (3567).

Following the presentations, attendees broke up into roundtable groups as officials circulated, and then presented their ideas, concerns and issues. Group spokespersons state Rep. Joe Bertram, Tom Croly, Doug Corbin and Judith Michaels shared their groupsâ€™ thoughts and priorities: focusing on educating visitors before they arrive, perhaps through information distributed on air carriers; monitoring water coming into the ocean for chemicals, waste and other destructive materials; enforcing penalties for developers and builders who donâ€™t properly grade the land; periodically closing off areas specifically for regeneration, and asking commercial operators to insist on proper â€œreef etiquette.â€

Corbin, of Shaka Divers, displayed a box of 10 to 15 pounds of lead fishing weights he said he picked up from four dives at some of Mauiâ€™s most popular dive spots. His group advocated educating the public about â€œfishing responsibilityâ€ and raised the prospect of establishing affordable fishing licenses to disseminate the information.

Paracuellas ended her presentation with a slide of a homeâ€™s front door with shoes neatly stacked on the floor. â€œWhen you enter someoneâ€™s home, you are a guest,â€ she said. You are respectful and take off your shoes. You donâ€™t go to their refrigerator or sleep in their bed. You even ask if you can use the bathroom. When we go to the beach or use the ocean, we are all guests. We need to be aware of our actions.â€

The public is invited to attend the next KCA meeting, which will be held Tuesday, Aug. 19, beginning at 6:30 p.m. at the Kihei Community Center on Lipoa Street. The meeting will focus on the status of the South Maui Coastal Trail. 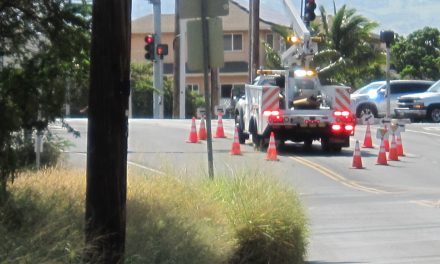